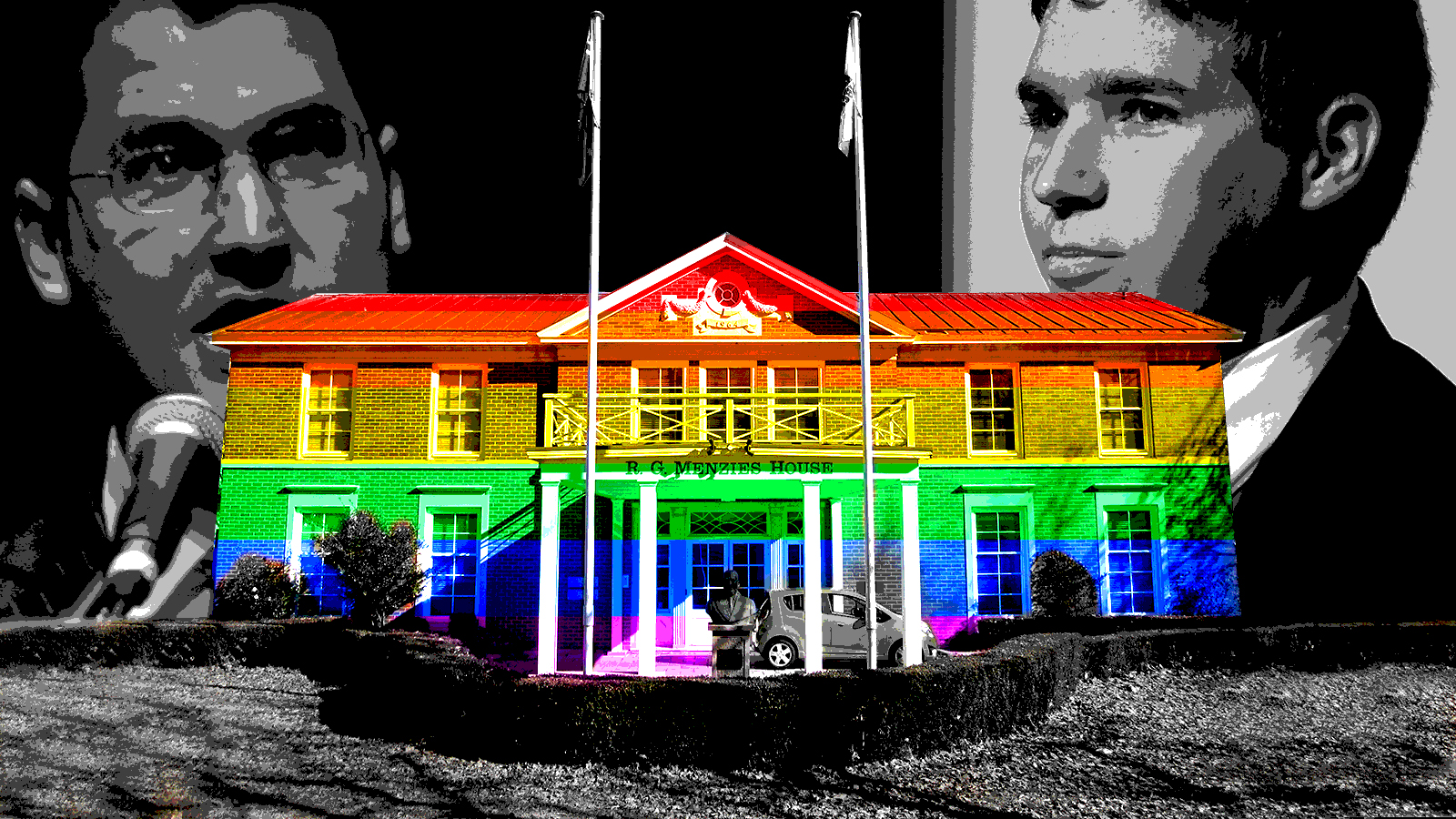 The Liberal-National coalition is the only major Australian party that seems to openly invite homophobes into their ranks. They do not nearly enough to openly condemn homophobia among their members and supporters and even have homophobes in public office.

In our current election campaign, Kurrajong Labor candidate Maddy Northam has publicly disclosed homophobic abuse against her at least twice – one of which was from an account run by a person claiming to be hardcore Liberal supporter. The same account also attacked other openly queer candidates, such as Brindabella Greens candidate Johnathan Davis.

Davis claimed that Brindibella Liberal MLA Mark Parton told him that he believed Davis couldn’t win because he felt that Davis would be “too camp” for the traditionally conservative-leaning district of Tuggeranong, though he later walked back and later distanced himself from the instigator of this latest discourse on the Liberal party’s interactions with the queer community.

On the back of this latest incident, not one Liberal candidate made any kind of public representation explicitly condemning homophobia from their own side. Alistair Coe instead reposted a quote from an ABC radio interview he gave after the party’s last public manifestation of homophobia. They should proactively distance themselves from homophobic sentiment. They should make it absolutely clear to their supporters and members that they should disagree with other candidates and their supporters on their political causes, not their immutable characteristics.

Instead the Canberra Liberals’, and indeed most of the Coalition’s, response to homophobia amongst their ranks is mostly reactive. In this most recent election, the Liberals had to disendorse one of their candidates in Kurrajong after he was exposed as a homophobic racist. This repeated the mistakes of the Liberal Party in the last federal election when a number of their candidates were disendorsed after they too were exposed as homophobes.

The Canberra Liberals voted against enacting the conversion therapy ban based on unfounded conspiracy theories (addressed in my previous post) that it would “criminalise ordinary Canberrans“. [1]

Labor, the Greens and their supporters are certainly trying to capitalise on the ambivalence towards queer rights and other progressive issues that the Canberra Liberals have projected since Seselja and the conservative faction of the party took over in 2007.

Labor’s first video advertisement attempts to emphasise that the party’s conservative turn under Seselja, Hanson and Coe is out-of-touch with an electorate that has voted for left-wing (Labor, Green) or centrist (Carnell-era Liberals) parties in all but one election since 1989. I haven’t seen much Greens material but I assume it runs along the same lines. One pro-Labor meme page that’s been taking off is certainly pushing the homophobia angle whenever possible. It’s hard to see how the Liberals will shake off this image in the few weeks leading up to the election.

Elected Liberals and Nationals use their parliamentary platforms entertain homophobic ideas in public spaces and bring homophobic canards into the public discourse, often without explicit condemnation and sometimes with almost absolute impunity.

In recent memory, George Christensen suggested that the Safe Schools anti-bullying program was akin to “a paedophile grooming a victim”. Former Liberal (later Conservative) senator Cory Bernardi [3], on more than one occasion suggested that same-sex marriage would lead to to the legalisation of bestiality. He later said that the Safe Schools would “indoctrinate” children into a pro-gay political agenda.

All of these claims – that queer people have paedophilic proclivities, that queer relationships are akin to bestiality, and that queer people try to “indoctrinate” or “recruit” young people – are manifestations of well-documented homophobic canards. There is simply no context in which these canards can manifest without homophobic sentiment being the intent.

In the three examples I cited, party leadership was unwilling to openly condemn such homophobia, instead cryptically distancing themselves from such plain and obvious hate speech.

On Bernardi’s bestiality outburst, then-leader Tony Abbott (who has himself said that gay people make him feel “threatened”) avoided criticising obvious homophobia, instead saying that they were “ill-disciplined” and that they were “views I don’t share… [and that] I think many people would find repugnant” without saying anything on what he thought. Malcolm Turnbull called Mr Bernardi’s views “extreme and hysterical” but not homophobic or wrong. Howard government minister Nick Minchin called the speech a “perfectly proper defence of the definition of traditional marriage”. [4] (ABC 2012)

These aren’t recent examples, so I’ll list some: Peter Dutton evoked unnecessarily sexual imagery about queer people in saying said that CEOs and the NRL should stop “jamming political correct views down our throats” when they publicly supported same-sex marriage. Kevin Andrews devalued queer people by suggesting that queer relationships were of no greater importance than his friendships with his “cycling friends”. Neither of these comments received significant Liberal pushback.

It is clear that some in the Liberal-National Coalition see queerness not as an immutable characteristic, but as a political identity to be debated. The party should, as the parties on the Australian left have done, challenge this view and encourage an environment of queer affirmation just as they (presumably) would affirm racial tolerance and religious freedom. Instead, they preselect homophobes and allow their parliamentarians to platform vile homophobic canards. They respond to this homophobia – assuming they respond at all – only in reaction to political developments, they do not seem to proactively instil tolerance of queer existence within their movement.

[1] I should note that the Liberals voted in favour of the bill in the in principle stage of the debate, but then tried to unnecessarily amend it, moved to delay it to the next Assembly and then voted against its third reading. The Liberals’ rationale for these additional actions was that the Bill would “criminalise [presumably non-abusive] parents”. I have already written at length about why it would not. (ACTLA Hansard proof version, 27 Aug 2020, pp. 2258-2263).

[3] Mr Bernardi recently resigned from the Senate, resulting in his seat being picked up by the Liberals. While his splinter Australian Conservatives party existed it rarely deviated from the Liberals voting record in the Senate. In the lead up to this occurring, it was widely rumoured that he would rejoin the party.

The image at the header is available under a Creative Commons BY-SA license.